I also attended the Tennessee Department of Education Training in Dual Credit Sociology in July 2016 and July 2017.In Spring 2016 I was accepted into the MTSU Graduate School of History. I have taken Historiography, Historical Research, State and Local History, and Seminar in Public History classes thus far. I have enjoyed returning to the university level to study historical topics. My thesis topic is entitled: Divided - The Political History of DeKalb County, Tennessee - 1837 - Present. I have completed the first two parts: Part I: Divided (1837-1870) & Part II: Transitions (1870 - 1900). Subsequent parts are forthcoming as the research continues!

I received a very special award in Spring 2010. I was selected as the Tennessee Outstanding Social Studies Teacher for the High School Level by the Tennessee Council for the Social Studies. This award was special because I had just been back in the classroom for only one and 1/2 years.

I have been appointed to three very important committees in the State of Tennessee.
In February 2015 I was appointed to the Secretary of State Blue Book Curriculum Task Force by Tennessee Secretary of State Tre Hargett. This committee was tasked to create Lesson Plans for use with the Tennessee Blue Book. I created three lesson plans - The U.S. Constitution’s Bill of Rights vs. the Tennessee Constitution’s Declaration of Rights; Tennessee City Government, and Tennessee County Government. These lesson plans were used by teachers across the state and this committee ended work in August 2015. Additional Lesson Plans can be found at: http://sos.tn.gov/products/teacher-resources.

In September 2015, The Tennessee Secretary of State Tre Hargett reassigned the Blue Book Task Force to continue working as the Secretary of State's Civic Engagement & Advisory Committee for a two-year term. This committee was tasked with aiding educators and encouraging teachers and students to engage in civic activities. The website is http://sos.tn.gov/civics. The lesson plans are at: http://sos.tn.gov/civics/lessonplans. I created a specific plan dealing with the Voting Process.

In June 2016 I was appointed to the Tennessee Social Studies Standards Recommendation Committee by the Tennessee House of Representatives Speaker Beth Harwell was subsequently elected Vice-Chairman by the committee. Our task was to review the Social Studies Standards of Tennessee to be used starting in the 2019-2020 School Year. The website for review is https://apps.tn.gov/tcas/. Our work was completed in March 2017 and passed the Tennessee State Board of Education on July 28th, 2017 for implementation in 2019-2020.

On a personal basis, I was born in Lebanon, Tennessee, and raised in Alexandria, (DeKalb County) Tennessee. I have 4 sons, 3 daughters-in-law’s, and 4 grandchildren (2 Boys and 2 Girls). I have recently become engaged to a very wonderful lady. I am also an Ordained Minister affiliated with the Church of God (Cleveland, TN).

My hobbies include being an Extra Class Amateur Radio Operator - Callsign W4WFC - former callsign: KC4GUG, and Genealogy / Historical Research of which I get to do a very limited amount these days.
Vision, Mission, Goals and Beliefs 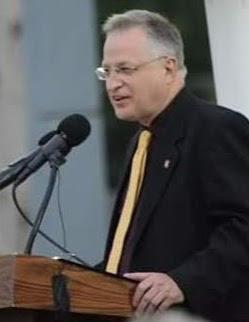